Finding a great quality ultralight spinning reel that’s affordably priced is quite a challenge in today’s fishing industry. Many of the spinning reel models that are priced at under $40 are too stiff or too poorly made to be considered by avid anglers, but the Lew’s Laser Lite Speed Spin reel is one that defies anything I would expect out of a reel in this price range.

In this article, I’ll take a closer look at the Lew’s Laser Lite Speed Spin and examine some of the features and capabilities in order to determine whether or not this reel is actually as good as advertised. I personally own this reel and have used it extensively over the last 12 months to provide a comprehensive review based on my own experience and insights. 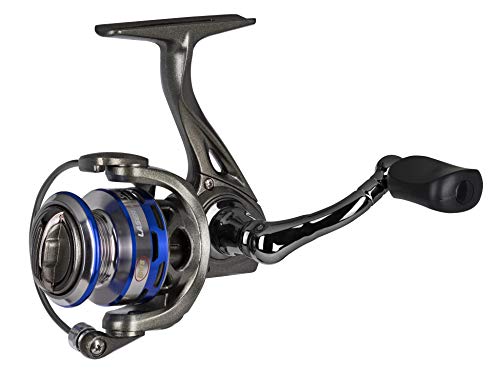 Lew’s has quickly become one of the fastest-growing rod and reel manufacturers in the United States and elsewhere due to the company’s commitment to producing quality products at a price the average angler can afford. While Lew’s is known to craft products that are in the premium quality range, they also deliver rods and reels that are specifically designed to accommodate budget-minded anglers as well.

The price of the Lew’s Laser Lite Speed Spin is comparable to most other reels you might find from Shakespeare, Daiwa and other reputable brands, but the performance far surpasses anything I’ve seen out of an ultralight reel in this class.

I’ve been using this reel now for more than a year and it has performed better than expected in every situation I’ve used it in.

As an avid crappie angler, I love to fight slabs on an ultralight rig, especially during the spring season when spawning crappie are known to gather in massive schools. Likewise, I have put this reel through the ringer, so to speak, when fishing trout streams and bass lakes. The drag held up as well as I could expect when I hooked a 4 pound largemouth with the Lew’s Laser Lite Speed Spin 75.

The reel’s lightweight graphite frame is designed to offer durability without the extra weight that you might expect when using a reel that has a metal frame. A graphite reel frame and side plates are more than sturdy enough for use with an ultralight rod when fishing for smaller fish species and the reel has not shown any sign of weakness or flexing, even under significant pressure when I hooked a sizable flathead catfish with it.

The Lew’s Laser Lite Speed Spin is able to cut down even further on the overall weight thanks to the fact that the rotor is also made of lightweight skeletal graphite material. The reel weighs just 5 ounces which is one of the lightest I would consider using for crappie or rainbow and brown trout. The LLS50 size model weighs 4.9 ounces while the bigger LLS100 weighs 7.8 ounces.

The first thing any angler will notice as soon as they handle the Lew’s Laser Lite Speed Spin is the incredible smoothness it has in reeling and casting. Its smooth performance feels more like what I might expect from a premium Shimano or Abu Garcia ultralight reel. The reason the reel is capable of delivering such performance is due to its 6+1 bearing system.

The 6+1 bearing system is made with stainless steel double-shielded ball bearings, which—like all of Lew’s other spinning reel models—can be used in both freshwater and saltwater without issue.

The double-shielded ball bearings are designed to withstand the corrosive properties of saltwater and maintain the reel’s smooth action without the need for regular cleaning after each use. The reel is also made with a zero-reverse one-way clutch bearing.

The Lew’s Laser Lite Speed Spin is also crafted with a double anodized ported aluminum spool, which is made to further reduce the overall weight of the reel without sacrificing performance. The double-anodizing on the spool is mainly designed to reinforce the reel’s ability to combat the corrosive elements of saltwater.

In addition to this, the reel is made with a very thick and strong aluminum bail that neatly and evenly collects the line onto the spool with ease. Over the course of the last year, I’ve had no reason to be displeased with the strength of the reel, or its spool. The efforts Lew’s made to reinforce the durability have certainly been noticed by anglers who have used the reel.

One of the main concerns anglers have when it comes to ultralight reels that are similar to the Lew’s Laser Lite Speed Spin is their weak or rough drag system. I’ve tested and re-tested the drag on numerous fish species from largemouth to bluegill and everything in between. In every instance, the drag has performed beautifully and smoothly with ease.

Each of the Lew’s Laser Lite Speed Spin’s size models boasts a steady 5.0:1 gear ratio that’s ideal for using with lightweight lures and rigs. The reel’s smooth action is due in part to the fact that it comes pre-lubricated with Lew’s Speed Lube which is designed to provide outstanding smoothness in all weather conditions. I recommend that you purchase some of this Speed Lube and use it once every few months if you fish regularly.

The Lew’s Laser Lite Speed Spin is one of the more impressive ultralight reels I’ve come across in my fishing career. It performs much like you might expect a reel that costs upwards of $75 to, yet it’s available for less than half that amount. The reel demands very little upkeep and applying seasonal lubrication is just about all that’s needed outside of a yearly cleaning, which is considered to be standard with just about any reel.

Lew’s has managed to cut down on the overall weight of this reel by crafting many of its external parts using lightweight graphite material. The internal parts are very much made of quality materials and it’s evident in the smooth, durable performance of the reel in terms of its casting, reeling and drag system.

The company offers a one-year limited warranty with this reel and it’s one that has received rave reviews from almost anyone that’s used it. If you’re seeking an ultralight reel that delivers outstanding performance and is affordably priced, look no further than the Lew’s Laser Lite Speed Spin.