Shimano is no stranger in the fishing industry and many professional anglers would argue that they are at the top of the game when it comes to producing fishing reels that are best overall in value and performance. The brand has been in business for a century now as the company was originally founded by Shozaburo Shimano in 1921. The company has progressed since then and is one of the major heavyweights in the fishing industry that regularly brings top-notch products into the scene.

The Shimano Spirex FG Reel is yet another outstanding fishing reel to add to the long list of products that the company has released in recent years. This moderately-priced spinning reel is one that is both elegant and performance-driven and is easily one of the best in its class.

In this article, I will cover the Shimano Spirex FG Reel’s features and capabilities, as well as the performance level you can expect from this reel. All of the judgements in this review are based on my own experiences and testing. 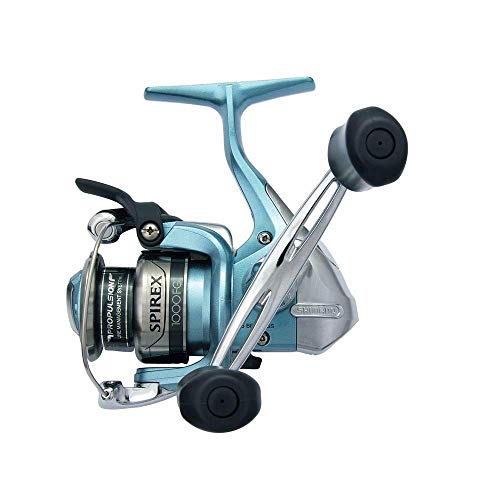 Learn more about how we score products.

The Shimano Spirex FG Reel is one of the newest series of reels from the brand and is one that’s quickly drawing rave reviews from anglers who have put it to the test. It sports a clean sky blue and silver coloration that gives it a distinctive look. This reel, like most of the other Shimano spinning models that have been produced in recent years, is all about having a buttery-smooth casting and retrieval. The Shimano Spirex FG Reel certainly delivers in that department despite only being made with a 5+1 ball bearing system.

Shimano produces three different versions of the Shimano Spirex FG Reel that each have their own strengths and advantages. The SR1000FG is the smaller and more lightweight version of the Spirex FG that can be used as the perfect crappie fishing or finesse lure special. The SR2500FG is very similar, but is made with a slightly larger frame and is a bit heavier overall in weight. The largest model of the Shimano Spirex FG Reel, the SR4000FG is one that’s perfectly equipped for bass fishing or other larger freshwater species and features a much heavier drag of 15 pounds along with greater line capacity.

Each of these three reels has certain qualities that make them perfect for specific applications. Shimano has taken into account the three main purposes that most anglers want to purchase these reels for. In addition to being ideal for all kinds of freshwater fishing, the Shimano Spirex FG Reel is well-adapted to deal with the rigors that come with saltwater fishing, meaning it can serve as an ideal coastal fishing reel that will catch everything from flounder to stripers along the shoreline.

In addition to having an incredibly-smooth feel and reeling action that anglers typically expect in a Shimano product, the Shimano Spirex FG Reel also offers more than enough in the durability department to make it one of the better freshwater and saltwater spinning reels on the market right now.

The frame is made of highly-durable graphite material that’s also somewhat lightweight. This lighter frame helps to offset the overall weight of the Shimano Spirex FG Reel since some of the internal parts are made of a heavier material than most other reels. The frame maintains great rigidity considering the fact that it’s made out of graphite. Shimano managed to accomplish this by creating a dense, one-piece frame for each of their three Shimano Spirex FG Reel models.

The material is much lighter than what’s been used in previous Shimano reels that were marketed as a lighter model that’s capable of being a workhorse in both freshwater and saltwater. Shimano also went to great lengths to ensure that their engineers and design experts created a solid frame that was also geared toward sealing the edges and keeping out any water that might find its way into the internal parts of the reel.

This is very important for the Shimano Spirex FG Reel’s capability in any saltwater applications as the presence of saltwater inside the inner workings of a fishing reel often has a detrimental effect over the course of the reel’s lifespan.

The Shimano Spirex FG Reel is made with 5 stainless steel ball bearings that are specially machine-cut to give this reel it’s characteristic smooth-as-silk retrieve and casting effect. This incredibly smooth action plays a major role in a number of different lure presentations and rigs as it allows anglers to more easily feel those subtle pecks that happen when a fish might be slightly biting at your lure. Once you feel these bites, you might recognize that you should slow down your retrieve a bit in order to pick up a strike.

The smoothness of the Shimano Spirex FG Reel is certainly something that can’t really be overstated when considering this model’s true strengths and weaknesses. It makes retrieving lures much easier and also gives certain types of lures a much more realistic and fluid action that will result in greater amounts of bites compared to a reel that’s more clunky and robotic.

The SR4000FG comes with one extra ball bearing in case one happens to break. Shimano is smart to have included this as the strain that gets put on a reel when an angler is fighting and landing larger-sized game fish can often result in a ball bearing getting damaged and needing to be replaced. Instead of having to order a replacement or send the reel back to Shimano, you’ll be able to quickly and easily replace one if needed.

The spool is another factor in just why the Shimano Spirex FG Reel is so smooth. This is directly tied to the fact that the spool is made from cold-forged aluminum. Like most other Shimano reel models, the spool is one part of the reel that’s likely the most reliable and durable. It’s built to be able to withstand the extreme conditions you might encounter on the water and the rigors that are also associated with saltwater fishing for hard-pulling predatory fish around coastal areas.

Unlike some other reels, the rotor is connected to the Shimano Spirex FG Reel’s side plate. It’s a seamless design that can be taken apart and cleaned with relative ease when necessary.

The gear ratio on both the SR1000FG and the SR2500FG are both equipped with a 6.2:1 gear ratio that’s just about perfect for the versatile applications that most anglers will want these reels for. The larger SR4000FG comes with a 5.7:1, which is still incredibly smooth, but is much better equipped to give you more cranking power to handle bigger fish.

The smallest version is ideal for use with ultralight rods to go after smaller species of fish such as trout, panfish, and various other freshwater or saltwater species. The medium-sized reel offers the same gear ratio, but is a bit heavier and offers a bit more with 9 pounds max drag. If you’re looking for a great saltwater and freshwater reel that can handle big largemouth, as well as everything from a bull redfish to a king mackerel, then the bigger SR4000FG is designed with 15 pounds max drag and a greater ability to maintain control over large fish that often send your drag screaming on those initial few runs after you’ve hooked the fish.

While these reels are all designed to handle larger fish as they get progressively larger, they are not quite as well equipped to handle monster fish as other brands and models. Where the Shimano Spirex FG Reel really shines is its buttery-smooth action. It does leave a bit to be desired when it comes to just how tough and strong the drag is compared to other premium quality reels and those in its class.

The Shimano Spirex FG Reel is equipped with a host of great features and capabilities. Some of the other most talked-about items that are included with this reel series is the fact that it’s built with varispeed oscillation, which greatly contributes to its smoothness and also makes the reel very easy to handle in a variety of different situations.

The reel is also built with a Propulsion Line Management System, which is also described as the Propulsion spool lip design. The main purpose of this feature is to give you longer and more accurate casts when using both lightweight and heavier lures and bait rigs. It also helps out in terms of making sure the fishing line isn’t twisted and significantly cuts down on the amount of tangles, twists and backlashes that might occur using the reel.

One of my favorite features that I haven’t yet mentioned is the Quickfire II trigger release mechanism. Most anglers either love or hate a feature like this, but it does make the Shimano Spirex FG Reel incredibly easy to use for beginner or novice anglers who are willing to spend the extra money to purchase this reel.

Most other reels that have been equipped with a Quickfire trigger have been very hard to operate over the course of a few seasons and often turns out to be something that’s more of a hindrance to the reel’s overall function than anything else. However, the Quickfire II’s design and function makes it very easy for anglers to effortlessly flip the bail over and grab the line at the same time before casting their lure.

Another feature that’s included to make the reel more easy to use and also give it better overall functionality in the hands of a novice angler is the dyna-balance system. This and all of the other features I’ve mentioned combine to make this one a true favorite among serious anglers when it comes to both freshwater and saltwater environments.

There’s no denying the fact that the Shimano Spirex FG Reel is likely the smoothest one you’ll find in the same price range among other spinning reels. As usual, Shimano poured many hours of testing and diagnostic work into this reel in order to make sure it performed at the level they intended it to. Considering the fact that this reel is priced well under $100 in virtually any online retailer or tackle shop, it’s well-worth the investment to purchase this new, silky-smooth casting reel from Shimano.