Shimano is easily one of the top fishing reel manufacturers in the industry and their products speak for themselves in terms of quality and performance. It’s truly hard to find a Shimano fishing reel that anglers find to be disappointing as most of the spinning, baitcasting, and conventional reel models they’ve produced in the last decade have been incredibly popular and successful.

The brand also does a good job creating reels that are more affordable for the average angler. One such reel model is the Shimano Triton Reel, which is one of their longest-standing reel models that was first introduced more than a decade ago. This conventional reel is usually priced affordably, making it suited for anglers who aren’t quite ready to spend several hundreds of dollars on a single reel, but still want to enjoy the quality and performance that comes with Shimano products.

If you’re wondering whether this reel is worth a closer look, I’ve done the research, testing, and compiled this article to help provide more insight into the Shimano Triton Reel series. 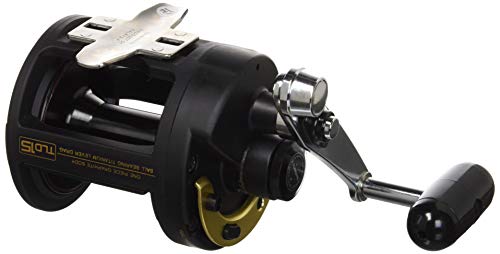 Click here to learn more about how we score.

The Shimano Triton Reel is a model that’s designed for anglers who truly value toughness and durability in a reel that can seemingly do it all. The Triton has a stellar reputation among anglers and those in the fishing industry as being one of the absolute toughest fishing reels you’ll find for less than $100.

Since it has a lower price point than some of the brand’s more premium fishing reel models, the Shimano Triton Reel doesn’t offer all of the bells and whistles you’ll find on their other, more expensive conventional reel designs. However, this fishing reel offers everything you really need to take on just about any type of fish in the world’s rivers, lakes and oceans.

The newest models in the Shimano Triton series are called the Shimano TR series, but I will focus mostly on the features and performance characteristics this reel offers in the latest models that are more popular and more widely available at bait shops and online fishing retailers. These reels are among one of my favorites when it comes to an affordable, yet quality-made conventional reel model that you can use in virtually any circumstance on fresh or saltwater.

Shimano makes the Triton reel series in two distinct models that include the TRN100G and the TRN200G. Both of these reels are virtually identical in their conventional design, as well as their features and capabilities on the water. The main difference is that the TRN200G offers a larger spool that’s capable of holding more line.

The Shimano Triton Reel is a reel that we consider to be a true workhorse that can do it all. It doesn’t have the same fancy design and sleek, ergonomic look that you might get in other models, but the Triton or TR series is absolutely reliable when it comes to handling big fish and standing up to the rigors associated with sportfishing.

The Shimano Triton Reel isn’t packed with all the high-end features you might find in some of the brand’s premium conventional reel models. However, it does offer just what you need to get the job done in a variety of different scenarios that include inshore and offshore saltwater fishing or going after any type of medium to large-sized freshwater species as well.

There are many different Shimano conventional reel models that are made with metal bodies and heavier material that is geared more toward going after tuna, marlin, and other giant species deep in the ocean. The Shimano Triton Reel is much lighter and easier to handle thanks to its all-graphite body.

This graphite material is dense enough that it can withstand an extreme amount of pressure and is capable of handling most fish species you’ll catch. These reels have a reputation for being some of the toughest lightweight conventional reels in the entire industry and it’s easy to see why when you get your hands on one.

Most baitcasting reels have a level wind system that engages when you’re retrieving the line in order to make sure it’s properly collected onto the spool without any issues. The Shimano Triton Reel has a specialized level wind that works when the fishing line is being taken off the spool, as well as when you’re winding it back in.

This is a unique and highly sought-after feature that helps to greatly minimize the amount of tangles and backlashes you get with a reel like this. It’s excellent for bottom fishing as you can simply flip the lever and free the spool, dropping your bait down with the confidence that you won’t have to watch your spool closely in the process to check for loops.

This is one of the most underrated features that makes this workhorse of a fishing reel so effective in a variety of different scenarios. The Shimano Triton Reel’s level wind system is what makes it one of the most reliable conventional reels in its class.

When it comes to manufacturing a lightweight conventional baitcasting reel, some brands struggle to determine just where they need to place a higher level of priority on certain parts of the reel. Instead of taking the cheap route and using a weaker material to make the Triton Reel series’ seat, Shimano recognized the importance of having a solid material that won’t easily bend or break.

The Shimano Triton Reel is equipped with a stainless steel reel seat that ensures you’ll have the durability you need to handle monster fish that are going to put a significant amount of pressure on your rod and reel.

Another one of the Shimano Triton Reel series’ most valuable features is the incredibly smooth drag system. The reel is made with a star drag and is what you might expect to get from a premium-quality reel that might cost three or four times what this reel is usually priced at. The drag system is made of titanium and is both strong and lightweight, being made out of a solid 1-piece graphite titanium material.

The system on both reel size models has a max drag weight of 14 pounds, which means you can go after any type of medium or sometimes large-sized fish without having to worry about lacking the necessary power you need in a drag system to handle such fish.

It features a gear system that’s made out of non-corrosive stainless steel material in both the main gears, as well as the pinion gears. This reel has a very simple overall design that makes it easy to take apart and clean when needed, which also helps contribute to the reel’s lifespan and ability to function properly for many years.

The Shimano Triton Reel’s line capacity is another great selling point for those looking to get a quality reel that won’t break the bank, but has enough line capacity to allow them to fish at more than 100 or even 150 feet in depth. The spool is capable of fitting a considerable amount of monofilament or braided line, as well as fluorocarbon if you choose.

The TRN100G is able to fit 390 yards of 12-pound test mono on its spool and 410 yards of 40-pound test braid. The larger TRN200G is designed to offer greater line capacity for anglers who prefer to fish in deeper waters and go after bigger fish. It’s capable of fitting 480 yards of 14-pound mono and 555 yards of 40-pound braid on the spool.

I noted the Shimano Triton Reel has a small knob on the side that allows you to adjust the centrifugal pressure on the spool and set it to the level that you feel comfortable with. It also comes with a bite alert system that puts out a loud clicking sound when the line is being pulled off the spool at a certain rate.

One characteristic that the Shimano Triton Reel has is the clicking sound it makes when the angler is reeling in the line. Some anglers prefer reels that are silent and will likely find this clicking sound to be annoying while it might not be an issue to others. The Bite Alert system can be switched on or off using a small switch on the side of the reel, but the clicking sound that’s made when you’re reeling in line is something that can’t be controlled.

The Shimano Triton is mostly designed for bottom-fishing, trolling or casting heavy lures in offshore waters. It excels as a reel that is nearly perfect for budget-minded anglers who demand quality out of their tackle. The performance of this reel is usually described as being very good considering what the reel costs.

It offers a 4.3:1 gear ratio that is designed mostly to allow you to rely on the Triton’s drag and power to crank in your catch. If you require a faster gear ratio, you might want to look at the Penn Rival or Senator, which is slightly more expensive, but offers much of the same quality and performance as the Triton.

The Triton doesn’t offer the most flawless performance you’ll find in a conventional reel and you’ll likely notice that it has a small amount of play in the handle when retrieving the line or cranking in a fish. This isn’t enough to turn away anglers who want a durable reel that will serve them well in going after saltwater fish species, however.

I also prefer to look at a reel in comparison to an alternative. In this case I have picked the Piscifun Salis X Conventional Reel. I am a big fan of Piscifun’s products primarily because of their value for money so this will be a good matchup. The Triton’s largest model is a 2000 size and the Salis X’s smallest is a 3000 size, so I have compared these two options:

The Shimano Triton is a significantly smaller and lighter reel than the Piscifun Salis X. This is due to the gearing system. It is lighter but offers significantly less drag and a lower retrieve rate. Depending on what size saltwater fish species you are targeting, you may want to consider a more powerful conventional reel.

The Shimano Triton Reel series is clearly one of the better choices for anglers who want an affordable reel that will hold up to the rigors of offshore saltwater fishing without breaking. The reel’s durability and overall toughness are its best qualities and the Triton reels can last many years when used and maintained properly.

If you want a solid conventional reel, but aren’t ready to drop hundreds of dollars to purchase one, the Shimano Triton might be the right choice for you.