Penn fishing reels are among the most popular when it comes to offshore fishing reels that are specially designed to handle the rigors associated with catching giant saltwater fish. Penn is one of the most trusted brands in the fishing industry and the company is well-known for manufacturing some of the best quality saltwater fishing reels in recent decades.

The Penn Fathom is one of the brand’s highest-selling round reels for a number of reasons. It’s a more serious lever drag reel that is equipped to deal with the hard-pulling fish that are often caught many miles away from the nearest coast.

In this article, I’ll take a closer look at the Penn Fathom Lever Drag Reel and compare whether its features and capabilities are actually worth the money for the average angler. 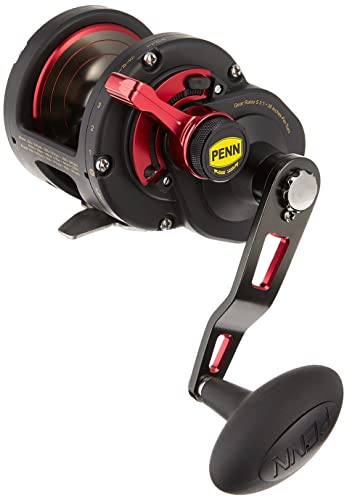 Learn more about how we score products.

The Penn Squall is one of the most popular models made by the company and has many of the same features you find in the Fathom. The main difference in the Penn Squall and the Fathom Lever Drag Reel is the overall quality of the body and sideplates, as well as a few other aspects. The Fathom is made with an all-metal body and sideplates, which is more appealing to serious saltwater anglers who like to target monster red snapper, grouper, or other massive species that are sure to put a strain on every part of your fishing reel.

The Penn Fathom Lever Drag comes in two versions, a single speed reel and a 2-speed model. These two versions of the Fathom are relatively identical in every aspect except for a few items. Both of these reel lineups offer different sizes that allow you to select the one that’s just right for your own individual needs. For this article, we will focus on the single speed versions of the Penn Fathom Lever Drag, but will also include some information regarding the differences between this lineup and that of the 2-speed models.

The Penn Fathom Lever Drag single speed line includes 9 different models that range from the smaller 15 size reel all the way up to the monster 60 size. Penn offers the Fathom Lever Drag Reel single speed in a wide variety of sizes, as well as gear ratios to allow each angler to select the one that’s just right for their own needs.

This reel is an offshore saltwater fishing setup that’s designed to be both lightweight and powerful enough to handle the rigors associated with going after the ocean’s largest sportfish species. Anglers use the Penn Fathom Lever Drag Reel for a variety of fishing methods as well which include jigging, bottom-fishing and live bait fishing.

One of the major differences in the Penn Squall and the Fathom Lever Drag Reel is the overall construction of both reels. The Fathom Lever Drag is made with an all-metal body and side plates, which is much more desirable for those who want to have greater durability in their reel. The graphite body of the Squall is tough enough to hold up against most fish species you’ll catch in offshore waters, but it lacks the rigidity needed to handle reeling in exceptionally large game fish species.

This metal material is made from die-cast aluminum and is intended to be as tough as most other mid-level conventional reels, but somewhat lighter than the heavier high-end models. The aluminum material is excellent when it comes to having the corrosion-resistance needed for fishing in saltwater environments.

The Penn Fathom Lever Drag Reel’s aluminum body is also intended to maintain its rigidity and to also keep the internal parts and gears in place. Serious anglers know that having a reel that’s not strong enough to maintain it’s form when dealing with an extremely heavy or hard-pulling fish is prone to experience issues with the alignment of its gears. The die-cast aluminum is rigid enough to hold up against anything, but is intended to be lighter than the Penn International or Torque reel series, which are both made with machined aluminum.

One of the more talked-about features of the Penn Fathom Lever Drag Reel is the Dura-Drag system. This is one of Penn’s toughest and most heavy-duty drag systems that is made for going after the ocean’s biggest fish. The Dura-Drag system is featured in the Penn International and Torque reel series. This system operates using Penn’s Dura-Lube, which is what many anglers consider to be a ‘wet-drag’ system that might require a bit more maintenance than a dry system.

The max drag of each of the Penn Fathom Lever Drag Reel models is 40 pounds in the larger 40N and 60 size models. Each of the smaller versions of the reel offers a modest 33 pounds of max drag weight, which is enough to handle just about any fish you might catch while bottom fishing or jigging.

The drag system is incredibly smooth and powerful thanks to Penn’s Dura-Drag washers. These specially-made washers feature a special Phenolic bonding agent that keeps water sealed out and prevents the breakdown of the washer material. These washers are actually the same kind that are used in the transmission of high-performance automobiles. The drag system is designed to withstand exceptional pressure and maintain an incredibly smooth drag from the time you hook the fish until you land it.

The most important feature of the Penn Fathom Lever Drag Reel for the majority of anglers is obviously the Lever Drag. Unlike the more common star drag reels, the Penn Fathom Lever Drag Reel offers a simple and easy lever that can be adjusted at any time while you’re fighting a fish. This lever is designed so that anglers can simply press their thumb down on it and increase the drag ever so slightly when they need to.

One of the main advantages of having a lever drag is the ease with which you can adjust your drag. Another advantage you have with a reel like the Penn Fathom Lever Drag Reel over a star drag is that you know how much you have adjusted your drag and can assess the drag level just by looking at the reel. This ability to quickly manipulate the drag helps when fighting larger-sized fish that are guaranteed to put a strain on your reel’s drag system.

The Penn Fathom Lever Drag Reel is equipped with 5 stainless steel ball bearings that are designed to provide you with an exceptionally smooth casting and reeling experience. Each one of these individual ball bearings are made with a shielded covering that helps prevent any saltwater corrosion that might occur over time.

In both the Penn Fathom Lever Drag Reel single-speed and 2-speed reel, you’ll find a double-dog ratchet anti-reverse system that’s designed to help evenly distribute pressure on the anti-reverse so that the reel functions better when you’re fighting any fish.

The Penn Fathom is packed with numerous other features that should be taken into account by anyone who is seriously considering the purchase of a solid round reel for offshore fishing. One of these features is the fact that the Penn Fathom Lever Drag Reel is manufactured with a stainless steel main gear and pinion gear. The intention that Penn had when engineering this reel with stainless steel pinion and main gears instead of other material is to further enhance the amount of power you can get from using this one.

The main difference in the Penn Fathom Lever Drag Reel single speed and 2-speed reels is that the single-speed version is better suited for going after fish that are small to medium sized. Most anglers would consider a 50-pound fish to be medium-sized when you’re talking about offshore saltwater species and this is the case with the single speed reels. The 2-speed reels offer more advantages for going after larger fish that are well over 50 pounds and sure to push any reel to its limits.

I also like to compare reels to other options in my reviews. In this case I have picked the Penn Squall. The Penn Squall is another lever drag overhead reel manufactured by Penn. These comparisons below are based on a 40 sized reel model:

The Penn Fathom is a larger, more heavy duty version of the Squall. It comes with the 2 speed gearing system which is particularly useful against big gamefish. It also has double the max drag on the same sized reel. If you are targeting large gamefish then I would personally recommend the Fathom, otherwise the Squall could handle smaller varieties.

The Penn Fathom Lever Drag Reel is one of the best values when it comes to mid-level offshore reels that offer plenty of powerful features. It’s made to withstand the harsh nature that’s associated with reeling in hard-pulling offshore fish species that often test the limits of any fishing reel.

While some of the more expensive Penn reels might seem to be the better choice depending on certain factors, I believe the Penn Fathom Lever Drag Reel is one that isn’t very far behind the International or the Torque.