Daiwa is known for making some of the best fishing reels on the market and has established themselves as one of the premier brands in the fishing industry over the last few decades. Their newest lineup of baitcasting reels is especially impressive when comparing them to some of the other models in the past, but Daiwa’s spinning reels have also come a long way in recent years. One of their most popular spinning reels in the Revros LT.

The Daiwa Revros LT comes in a variety of sizes and is considered to be one of the better sub-compact spinning reels available in today’s market. It’s easy to understand why so many anglers prefer to purchase this model over the many other types of spinning reels that Daiwa produces when you look at the specific features it offers. It’s made with very high quality parts and provides everything you need to smoothly cast or retrieve your line and bring in any fish that happens to bite.

In this article, I will take a more in depth look at the Daiwa Revros LT and why it is one of the more popular models that this brand produces. I’ll also cover how each of the reel’s features and components play into the overall action that makes the Revros LT one of the smoothest of any Daiwa spinning reels. 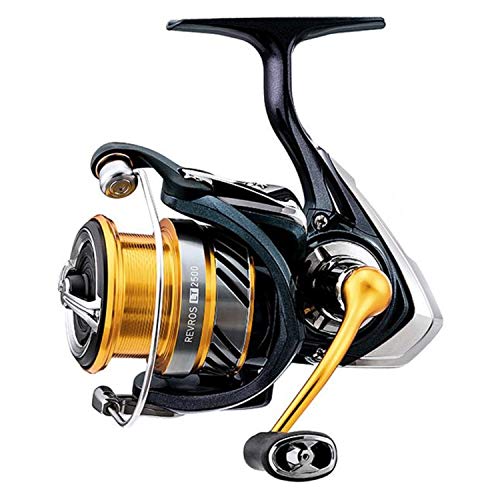 5.9/10Our Score
Check Price On Amazon

The Daiwa Revros LT is a moderately-priced reel that most anglers can afford. It offers everything you expect to get with a medium-level spinning reel and delivers exceptionally smooth casting and retrieval despite having a 3 bearing system. The reel features a gear ratio that’s either 5.2:1, 5.3:1 or 6.2:1, which is what most anglers prefer to have with this size spinning reel.

The Revros LT comes in sizes that range from the small 1000 size reel that weighs just 7.4 ounces, all the way up to the 4000 size reel that is 9.9 ounces. Each one of these reels features a 4 ball bearing system that also has one rear bearing. The Daiwa Revros LT gets its namesake from the company’s aim to make this model as a ‘light and tough’ reel that will stand up to just about anything you encounter on the water.

The brand has made some small adjustments over the last few years since the reel was originally released. These are only minute alterations and the reel’s interior components have remained largely the same since it’s been on the market. After looking at all of the features and the performance of the Daiwa Revros LT, it’s easy to see why so many anglers consider this to be one of the best spinning reels under $50.

The Daiwa Revros LT operates using the brand’s Automatic Tournament Drag system which is designed to give you more control when fighting large fish. The drag on the Revros LT is very smooth and can be adjusted at any time using the small knob on the nose of the reel’s spool. The drag system is made to eliminate the prevalence of drag pulsing thanks to the overall design that fits the spool onto the base of the shaft.

The Daiwa Revros LT is made using a lightweight type of material that is comprised of carbon composite. This carbon light body system isn’t quite as durable as the usual aluminum that’s often used on other reels that are similar in price, but it does allow the angler to have a much more comfortable feel with the rod in their hands.

The carbon material is still relatively strong and will usually hold up quite well when you’re fishing for small to medium sized fish. The reel is very tough considering its carbon housing.

One of the most prevalent points of feedback you’ll find about anglers who have used the Daiwa Revros LT is how smooth the reel casts. Despite it being made with a 4 ball bearing system, the Revros LT feels just as smooth as a premium quality model that features double the amount of ball bearings that this reel actually has. Daiwa is able to achieve this level of smoothness through its careful method of crafting the ball bearings, as well as the quality of the material used when making them.

The reel will cast out to a considerable distance with any type of line spooled on. Most anglers prefer to use an 8 or 10 pound test line on the Revros LT, which means they’ll be able to spool about 170 yards of line on at one time.

The gear system of the Daiwa Revros LT is made to handle just about any size fish you happen to catch on this reel. The Digigear system is made with aluminum and stainless steel components that are designed to prevent the interior of the reel from developing rust over time. These reels offer a gear ratio of 5.2:1 in the 1000, 2000, and 4000 size models, as well as a 5.3:1 in the 3000 and a 6.2:1 in the popular 2500-XH.

The reel is also made with Air Rotor technology, which is a specially designed feature from Daiwa that makes the reel feel and perform much more smoothly when you are retrieving line. This is possible because of the lightweight material that the spool is made with while the reel’s base and gear system feature tougher parts that are made of aluminum and stainless steel. The machined aluminum handle is also designed so that it transfers power power to the main gear, which means you’ll have more power when fighting bigger fish than you might usually get from a reel that’s similar in size or price range.

The Daiwa Revros LT is easily one of the best value spinning reels I have tested on the market today. The wide range of high quality features are what you might normally expect to find in a high-end model that would likely cost triple what the Revros LT is priced at. The reel’s performance is what I think makes it so popular and you’ll have no problem getting great distance out of every cast.