Updated on October 27, 2022 by Donny Karr
As an Amazon Associate I earn from qualifying purchases.

Finding a great quality ultralight spinning reel when you’re on a budget can seem like a monumental task if you’re not familiar with some of the fishing industry’s top brands. Daiwa is one that has long been devoted to crafting solid gear and equipment for anglers of all skill levels. I recently got my hands on the Daiwa QC750 Spinning Reel and put it through rigorous testing on the water for the past 6 months. 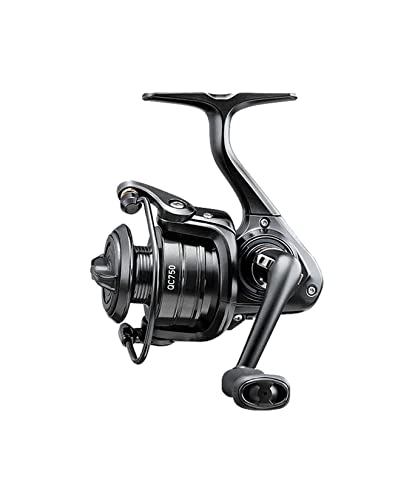 Daiwa has been in business since 1958 and many beginner and novice anglers recognize the brand for its devotion to producing great quality products for anglers on a budget. In most cases, the durability of Daiwa spinning reels is often second-to-none when compared to other products within the same price range. From my experience, the Daiwa QC750 Spinning Reel is no different.

Despite being categorized as an ultralight reel, this product is made out of mostly lightweight graphite and some aluminum parts. It’s a bit heavier than some of the ultralight reels I’ve purchased within the same price range, but it’s evident that Daiwa went to great lengths to make this a very tough, durable product.

Daiwa first released this reel in 2021 and it quickly became a hit within the fishing industry among freshwater anglers. In most cases, you should be able to purchase this reel for under $30, which makes it one that most avid fishermen would consider to be among the ‘budget-friendly’ options.

Weighing in at 6.2 ounces, I found the Daiwa QC750 Ultralight Spinning Reel to be light enough to allow me to comfortably fish throughout the day, or night without much fatigue. It does feel quite a bit heavier than some of the other ultralight reels that I would consider to be along the ‘budget-friendly’ category, such as the Lew’s Laser Lite Speed Spool.

The extra weight did take a short while to get used to, but it didn’t take long to realize that the extra weight was simply a sacrifice that Daiwa was willing to make in order to craft a highly-durable and tough ultralight spinning reel. Over the course of fishing many hours and days at a time, I had virtually no problems with this reel in terms of its balance and durability.

The reason why the Daiwa QC750 Ultralight Spinning Reel feels a bit heavier than most other budget-friendly ultralight reels is because it’s made with a heavier aluminum ABS Spool. This spool is designed to withstand the rigors of fishing in frigid weather if you’re into ice fishing, or for traversing across the rocky streams in pursuit of trout and panfish across much of the world.

The aluminum ABS spool is designed with the purpose of giving the angler optimal durability in these rugged, outdoor environments. I found it to be what I would honestly describe as the most durable ultralight spinning reel that I’ve owned thus far. I’ve tested it against everything from brook trout to a 6-pound largemouth bass that sent the spool screaming louder than I would ever expect most anglers to experience when fishing for small to medium-sized species.

So far, this reel has taken quite a beating during my field tests and I’ve been thoroughly surprised with its overall toughness. If I had to choose between the Lew’s Laser Lite Speed Spool and the Daiwa QC750 Ultralight Spinning Reel, I would opt for the Daiwa if durability were my main concern while the Lew’s would be better-suited for a more lightweight feel.

The only main drawback that I have about the Daiwa QC750 Ultralight Spinning Reel is that it is not as smooth as some of its competitors. It’s made with a very simple and straightforward 1+1 ball bearing system and the QC750’s casting and reeling performance is actually lacking in smoothness.

If you’re used to fishing with some of the higher-quality brand ultralight reels such as the Shimano Sienna Spinning Reel, then the Daiwa QC750 Ultralight Spinning Reel will likely feel like you’re trying to crank a low-end spincast reel compared to this. However, it does get the job done for the cost and the smoothness that it does offer has not decreased after heavy use in the last few months that I’ve fished with it.

If you’re looking for a budget-friendly ultralight spinning reel that is nearly as smooth as some of the more high-end options, you’re not going to like the somewhat clunky feel of the Daiwa QC750 Ultralight Spinning Reel.

It does have the ability to cast a surprising distance with the right type of rod, but reeling is simply not what I would have hoped for in this reel. After fishing with some of the Lew’s and Shimano ultralight spinning reels the past few years, it’s clear that the Daiwa QC750 Ultralight Spinning Reel is made with durability in mind, rather than smoothness.

The Daiwa QC750 Ultralight Spinning Reel’s gear ratio is slightly slower than some of its competitors’ reels. It features a steady 5.1:1 gear ratio, which is the baseline of what I might usually accept in a decent ultralight reel. I generally prefer one that offers a 5.0:1 or a 5.1:1 gear ratio as I often use inline spinners and other such lures when fishing for trout or panfish with ultralight spinning reels.

You can expect to crank in a respectable 22.8 inches of fishing line per turn with the Daiwa QC750 Ultralight Spinning Reel. It is a bit slower in terms of hook sets when fishing with live baits as it takes a few turns of the handle to truly tighten the line, but I found the gear ratio to be nothing out of the ordinary and optimal for most ultralight rod and reel setups.

One of the biggest concerns I typically have with an ultralight spinning reel is the line capacity, or lack thereof. Many brands throughout the fishing industry seem to devote their design and engineering efforts to making the reel incredibly smooth, or lightweight, but few actually craft a reel that provides plenty of line capacity.

I’m satisfied with the Daiwa QC750 Ultralight Spinning Reel’s actual line capacity when it comes to using 4 or 6 pound test monofilament line as it is rated to hold 110 yards of 4 pound and 80 yards of 6 pound test mono on the spool. If you’re fishing in or around heavy cover and you like to opt for braided line in 8 pound test, this reel will actually hold roughly 100 yards of line.

Be careful not to overfill this reel with lines. I did this during testing just to see if it could handle a few extra yards and the added line on the spool significantly decreased the reel’s performance overall. If you want to get optimal performance out of the Daiwa QC750 Ultralight Spinning Reel, I would recommend spooling on enough lines based on the specs, but less than the recommended amount.

Another concern that I sometimes have with a good ultralight reel is whether or not it can handle big, hard-pulling fish. Obviously, an ultralight reel is not what you might expect to use if you’re fishing for bigger fish, but it’s good to know that your reel can handle the fight if you happen to hook something larger than you anticipate.

I used the Daiwa QC750 Ultralight Spinning Reel on one of my favorite lakes for largemouth bass and truly put the drag system to the test. It actually performed better than expected and the drag was able to smoothly release line when it needed to, as well as hold good tension when the drag was tightened down more.

The Daiwa QC750 Ultralight Spinning Reel is made with 7 pounds of max drag weight, so don’t push your luck in going after fish that are often much larger than this. If I had to rate the drag’s performance on a scale of 1 to 5 stars, I would actually give it a full 5 stars.

Is the Daiwa QC750 Ultralight Spinning Reel Worth It?

If you’re looking for a highly durable ultralight spinning reel, yes. However, the Daiwa QC750 Ultralight Spinning Reel simply doesn’t feel the same as other spinning reels that are within the same price range in terms of lightweight feel and smoothness in casting and retrieval.

I did not expect much in the way of smoothness out of the 1+1 ball bearing system, but it is adequate for going after small to medium-sized fish. Most novice and beginner anglers might not find the lack of smoothness in casting and reeling to be an issue as they may not have experienced some of the premium reels that are often much higher in price than the QC750.

As I’ve already noted, if you’re looking for a reel that has that buttery-smooth casting and retrieval action, I would spend just a few dollars more and acquire the Shimano Sierra Ultralight Spinning reel or the Lew’s Laser Lite Speed Spool. However, if it’s toughness you’re after, the Daiwa QC750 Ultralight Spinning Reel has it in spades.

I was impressed with some areas of the reel’s performance and slightly let down with other factors as I’ve already touched on. Overall, I would recommend this reel to almost any angler as it turned out to be quite a bargain for the budget-friendly cost.